Did you know that clinical studies have analyzed and demonstrated the benefits of cycling whether indoors or outdoors for not only diminishing the symptoms of Parkinson’s but doing something that medications can’t…And that’s slowing the progression of the disease. Cycling has the ability to increase certain proteins in the brain that improve movement and cognitive functions.

Late in the summer of 2021 a team of 10 cyclists, 3 of whom have Parkinson’s Disease, successfully completed a 6-day, 335 mile cycling adventure “DC To D’Burgh…Pedaling Parkinson’s Outta Tahn” riding from Washington, DC to Point State Park in support of the Parkinson’s Foundation of Western Pennsylvania and to promote and demonstrate the benefits of cycling for helping folks living with Parkinson’s.

“DC To D’Burgh…” Took the cyclists along the historical C&O Canal Towpath Trail following the Potomac River to Cumberland, MD where it connects to the Great Allegheny Passage to form what the National Geographic Adventurer calls “An American Classic”. Together, these trails trace the history of the United States, from its early colonial days and the quest to find a route westward for commerce and industry, to its stand for independence and growth as an industrial nation.

We are now starting to get “DC To D’Burgh-2022” organized. “DC To D’Burgh-2022” is scheduled to depart from the National Mall in Washington DC on Monday morning, September 26th arriving at Point State Park on Saturday afternoon, October 1st. Like last year we will average around 60 miles per day spending the nights at hotels and B&B’s at various trail towns along our route.

If you or someone you know is interested in participating in this challenging 6-day adventure or volunteering to help make this event a success, please contact Dick Thomson at: [email protected] 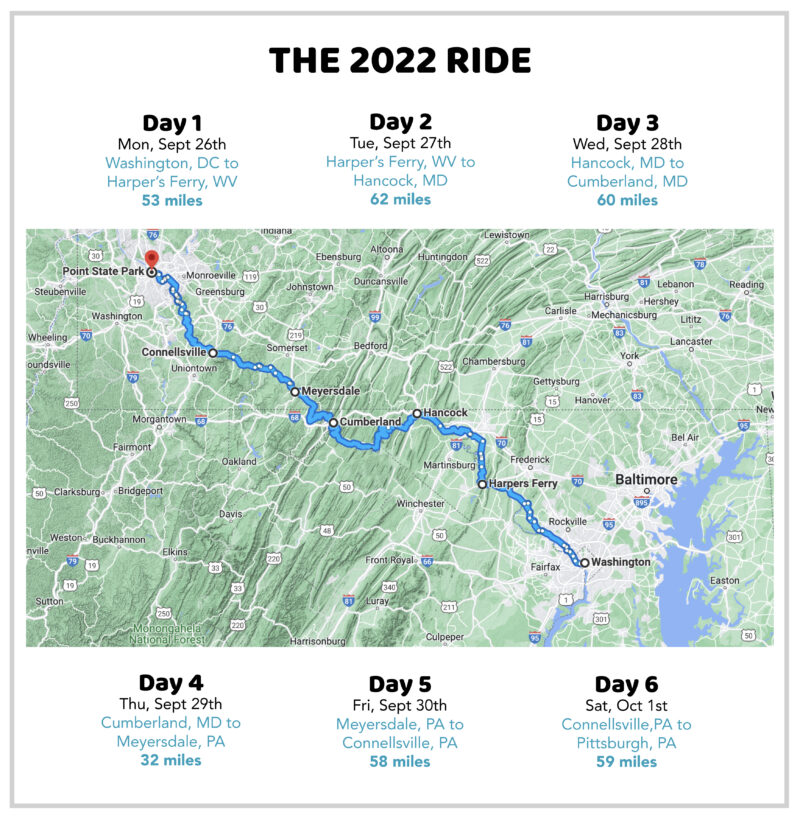