An event every week that begins at 10:00 am on Friday, happening 15 times

PD on the Move workouts and exercises are based on extensive training and experience in the fields of medicine, science, fitness, and dance, alongside the knowledge gained from Alexander Tressor’s personal battle against Parkinson’s for the past 13 years. The class integrates resistance training, stretching, coordination exercises, and cardiovascular intervals. The exercises are adaptable to all abilities, whether you are able to exercise while lying down, sitting, or standing. 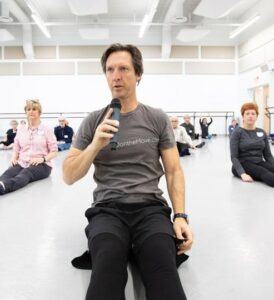 In 1976, his family immigrated to New York City and the age of 17 he started studying ballet at Balanchine’s School of American Ballet in New York City. His theater credits on Broadway and in national and international tours include: Teddy and Alice, On Your Toes, Zorba, Woman of the Year, Ain’t Broadway Grand, Sophisticated Ladies, and Hello Dolly.

Since being diagnosed with Parkinson’s in 2007 at the age of 48, Alexander has been developing a program to find ways to slow down PD’s progression and help alleviate some of the symptoms. In 2016 working together with his wife Alexis Peterson, M.D., PDontheMove.com was launched. Alexander holds seminars and lectures all over the world.  He was a keynote speaker at PFWPA’s Living Well Conferences in 2015 and 2019.

Alexander will be leading this class from his home in Providence, RI.